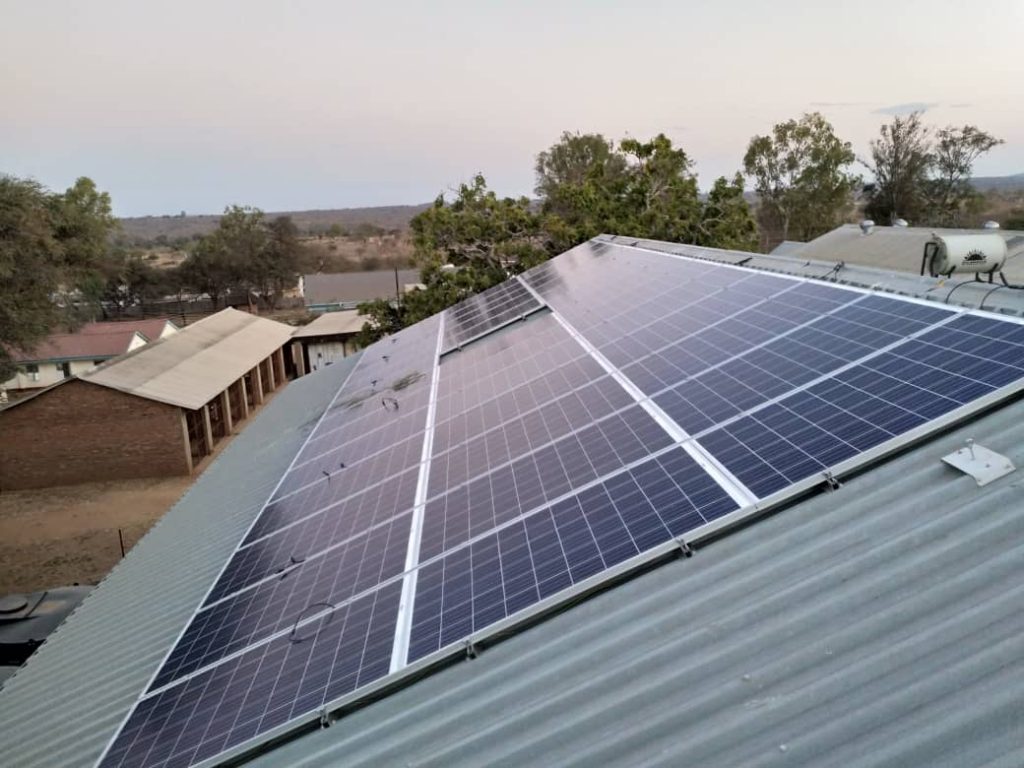 Sunergy (Pvt) Ltd., in partnership with local and international donors and technical partners, embarked on providing solar power to one of Zimbabwe’s primary referral and elective surgery hospitals.

The equipment required was sourced through a combination of donations and other funds which were funded and continue to be tracked transparently through the maxx|BlockchainHub. Donors receive an online login where they can follow the system’s electricity production and have proof that their donation reached its destination.

The system was commissioned in mid October of 2018.

At the beginning of 2017, our partners from Maxx Solar spoke to us here at Sunergy to look at organisations that would benefit through a fundraising / crowdfunding venture to introduce solar systems into their daily lives in a way that it would bring a substantial change to their daily operations.

Karanda Mission hospital is located NE of Mount Darwin on the banks of the Ruya river. It was established in the 1950’s and has grown to become a major contributor to the medical well-being of the population in the surrounding area as well as to patients throughout Zimbabwe.

Karanda has access to main ZESA grid power but due to its remoteness, power cuts are frequent and of varying duration in terms of time. This leaves access to generated power as the only alternative. There is also a delay between a power outage and turning on the generator, which means an absence of power to the theatres that cause complications during surgery.

The decision was taken that the new theatre block and the day surgery would be linked to a solar system, which would be the preferred power source.

The equipment required was sourced through a combination of donations and other funds which were funded and continue to be tracked transparently through the maxx|BlockchainHub. Donors receive an online login where they can follow the system’s electricity production and have proof that their donation reached its destination.

The design of the system which was finally commissioned in mid October of this year, comprises 54 panels providing 15kW of power. The panels are located on an IBR covered roof in an East/West configuration, on a building adjacent to the theatre block, as this roof was free of any shade constraints. That power is processed through combiner boxes into 3 x Steca PLI5000 inverters, one for each phase, and then routed through the existing electrical system to the theatres. There is a Hoppecke battery bank which serves as a backup to the system for limited night time use.

The Karanda PV Project was commissioned and launched publicly in Harare on the 19th of October 2018, with representatives from Karanda Mission Hospital in Zimbabwe, as well as many of the project’s implementation partners from Germany, South Africa and Zimbabwe. The event marked the unique convergence of leading technologies, expertise, support and innovation to achieve a common purpose.

We hope this represents the first of many such similar systems for Zimbabwe and our neighbours. Sunergy Zimbabwe along with our partners JVS Projects of Zimbabwe and Maxx Solar of South Africa, and the many organisations and people who supported the initiative, are proud that we have been able to harness the power of the sun to improve the health and well-being of the community of Karanda and beyond, long into the future.

With special thanks to everyone, named and unnamed around the world, who contributed so much towards ensuring this project’s success.

German Energy Agency (dena)
dena is Germany’s centre of expertise for energy efficiency, renewable energy sources and intelligent energy systems. As Agency for Applied Energy Transition dena helps achieve energy and climate policy objectives by developing solutions and putting them into practice, both nationally and internationally. In order to do this, dena brings partners from politics and business together, across sectors. dena’s shareholders are the Federal Republic of Germany and the KfW Group. https://www.dena.de/en